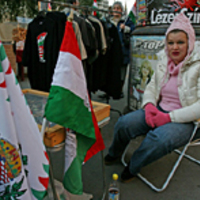 13 éve
Restarting the Riots – A Month of Not Much 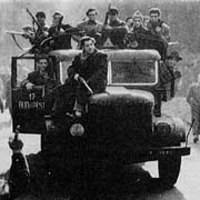 Who started the riots?
- Commie agents paid by Gyurcsány, who wants to discredit the noble revolutionaries by associating them with pain and destruction.
- Evil ex-PM Viktor Orbán, who is trying to completely ruin the country so he can get back to power.
- The Jews, the Romanians or the Slovaks.

What is going to happen now?
- The government will cancel the upcoming local elections, and turn the country into a communist dictatorship.
- The Virgin Mary, protectror of Hungary will rise again and lead the nation to a future completeley free of evil commies.
- The ruthless nazis out in the streets of Budapest are planning a coup d'etat, either with or without Viktor Orbán.

What is the rest of the world thinking?
- They - especially the Jews, the Romanians and the Slovaks - hate Hungary and want all Hungarains bankrupt and dead.
- They just love us. Hungary is the leading light of Central Europe. Always was, always will be.
- They have a cunning plan to rob Hungary of all its riches. Unfortunately the plan is secret and ordinary Hungarians wouldn't understanfd it anyway.
Facebook Tumblr Tweet Pinterest Google+ Tetszik
0

Before the riots, it was reported that Gyurcsany did have the tapes released. After all, he posted the transcripts on his blog.

As far as who organized it? I bet a little time in the Terror Museum could convince someone to confess their crime and point to their leader.

Tie those electrical things to their nards, we will have the answer in no time.
Válasz erre

I've taken pictures the last couple of days from the protests near the Parliament - the link for those interested here: www.flickr.com/photos/leilat/sets/72157594298911426/
Válasz erre

The violent storming of the headquarters of Hungarian Television was a premeditated government provocation, Zoltan Pokorni, deputy leader of the opposition Fidesz party, told public television on Tuesday. Pokorni claimed the rioters had been led by eight or ten paid provocateurs

Interesting - Anyone knows who they are?

Such a prominent Hungarian politician would of course not lie about something so serious?
Válasz erre

I think we should lock all politicians up and set up individual countries within this country. For example, a neighbourhood could become a country.

I will be the leader of my neighbourhood, gather an army, invade other neighbourhoods until I have the whole territory of the former Hungarian state and become an evil leader, locking up those who oppose me and those who chew on bloody sunflower seeds, spitting them on the floor or ground, bastards who sponge fags off me all the time, people who make that noise from sucking food out from their teeth on public transport, old ladies in surgical stockings, young 'ladies' dressed in white with ear-rings bigger than the rings of Saturn, young duds dressed in white, scary mafioso wannabes who drape 10-ton gold necklaces from their, well, necks, nini's who twitch their curtains should you so much as fart, stick-thin women who dress their dogs up in stupid outfits in winter as if dogs couldn't survive with their own natural coat as they have done for many a century, bug-eyed chihuahuas carried by stick-thin women, people who watch their dog lovingly as it dumps yet another shit on the footpath, lard, fat, oil, toitoi's, army fatigue casual wear, body odour, spent condoms, nutcases on public transport, the compulsory vomitting in public places, tarts/luxury prostitutes at Vorosmarty Square, pimps at Vorosmarty Square, policeman who turn a blind eye at Vorosmarty Square, gullible male tourists at Vorosmarty Square and generally anyone who crosses my path.

Hah, romanians, slovaks. I thought it were the evil aliens from Sirius who started the riots! Everybody, anybody, but not the few fascist bastards, who marched with Árpád-flags. I can't belive, that I live a country stupid like this. Please, somebody, even from sirius :)! Come and take me away
Válasz erre
Mégsem
Mégsem