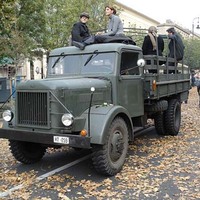 13 éve
Now, This Is What I Call Re-enactment

On the day that Hungary planned to celebrate the 50th anniversary of the 1956 Hungarian Revolution, streetfighting and chaos erupted for the second time in a month in downtown Budapest.

Trouble flared very early in the morning, when police started to remove all the people from Kossuth square who had been camping there for a month in protest of PM Ferenc Gyurcsány admitting that he had lied to the nation. The demonstrators say that the police attacked without any reason, while those in blue insist that they had to do something since the „peaceful” squatters had armed themselves with rocks and knifes and were planning to disturb the official celebrations scheduled later this afternoon at the same place.

The police were fast in emptying Kossuth square, but soon full-scale rioting broke out all around the city. Tear gas, water cannons and rubber bullets were all used by the police, but by late afternoon it was clear that this was not enough. Meanwhile the main opposition party, Fidesz started its planned rally in front of tens of thousands of supporters at central Astoria square. The police managed to push back the more violent demonstrators, only to see them join up with the peaceful Fidesz-supporters.

As night fell many parts of central Budapest were choking on tear gas, while a core of a couple thousand rioters was busy building barricades, burning cars and even looting some shops. A long and tense standoff with the police followed, with none of the two sides willing or daring to attack the other. Slowly the rioters started losing their patience, and as many of them tried to quietly leave the scene, police finally decided to attack. The rioters inmediately started running in all directions, with police chasing them everywhere, even to the roofs of some buildings. At 3:30 AM on October 24th a huge manhunt is going on all around the city.